On location with a BBC make-up designer in 1989

From 1986 until the early 2000s I produced illustrated feature articles and booklets for national film, video-making and digital photography magazines. I was one of the best-known contributors in the UK. 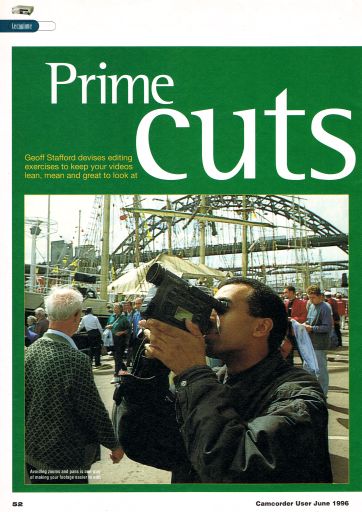 A camcorder in use at the Tall Ships Race. People using equipment — sometimes a model as in this case — was one type of photograph I supplied. Published here alongside my article about video editing.

I've had many hundreds of articles published and more than one thousand photographs including front pages. I provided editors with a complete package: words, photographs, captions and even illustrations occasionally. "Multi-skilled" before that was a trend.

I was asked to be features editor on the IPC Magazines title Video Camera, based at the famous Kings Reach Tower on the Southbank in London, and did that for a while. But most of the time I worked freelance.

I devised and ran workshops on behalf of the magazines at shows at London Earls Court and Manchester GMEX. Another side to my work was teaching. Particularly video production at the Earnley Concourse near Chichester for many years.

The web brought new opportunities. Beginning in 1997 I published my content online and earned a living from advertising and as an affiliate. 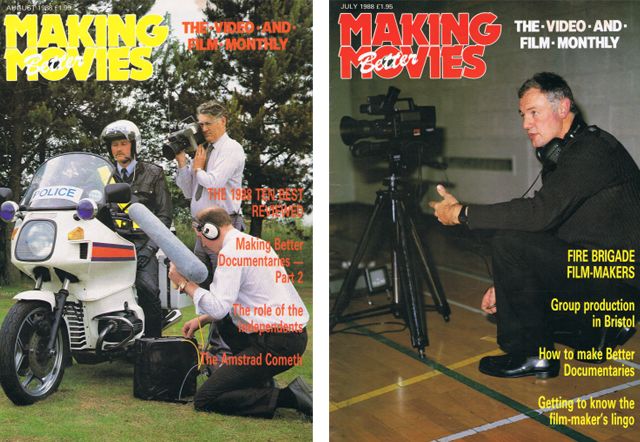 Two front covers for Making Better Movies magazine in 1988. Inside were my articles about police and fire service video units. 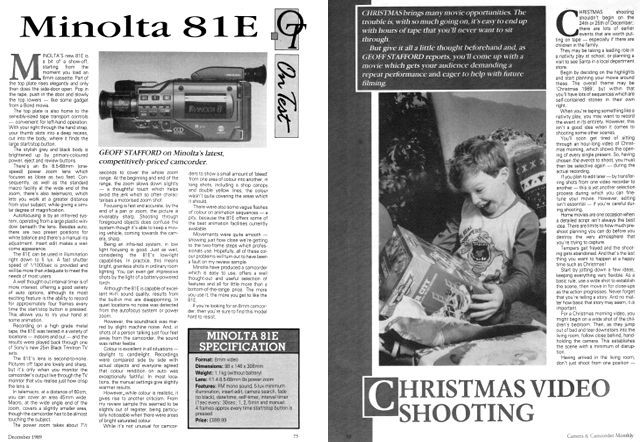 Above left: a review and photo of the Minolta 81E Video8 camcorder. Above right: an article about Christmas accompanied by a shot from a special photoshoot. Both in Camera & Camcorder Monthly. 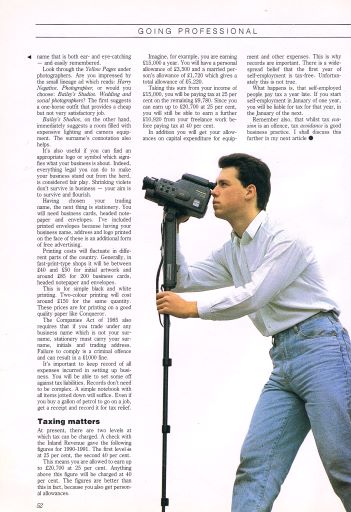 A photograph for an article about camera supports. 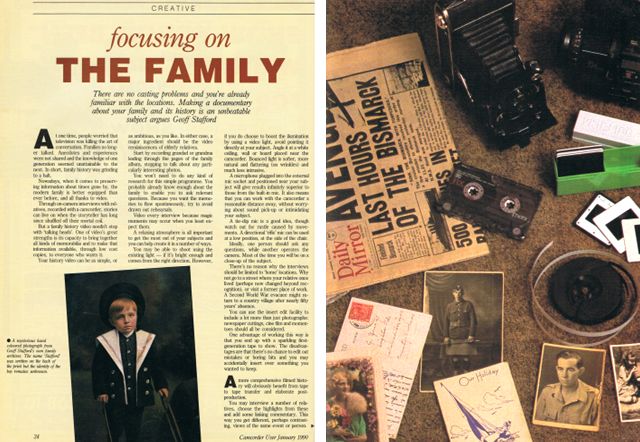 Photos and an article. How to make a video about family history — in Camcorder User. 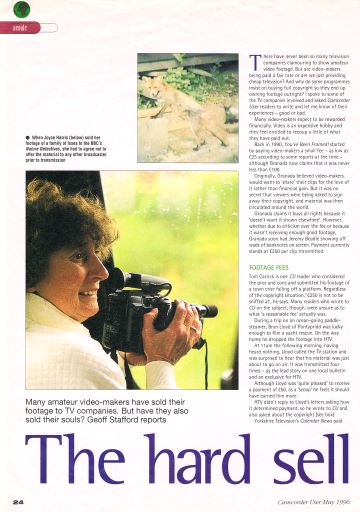 Main photo and article: in The Hard Sell I interviewed amateur video-makers who had given or sold footage to TV and I talked with the programme makers too. 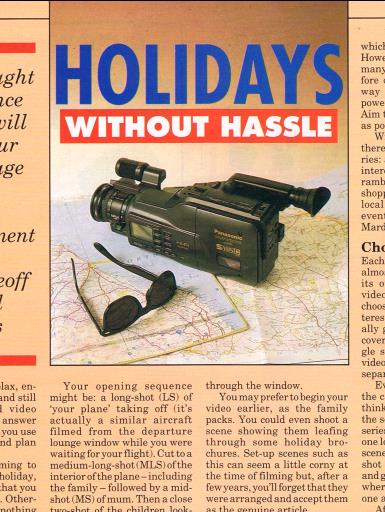 An article about using a camcorder on holiday, with a photo. 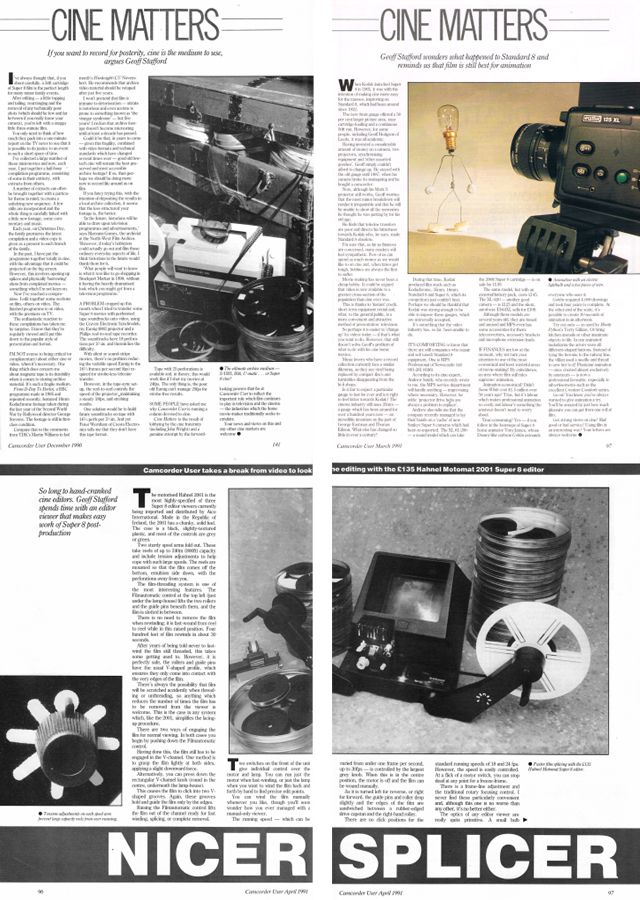 Cine Matters — a column I wrote for Camcorder User magazine — with photographs. And a review of a Hahnel film editor with a specially shot product photo. 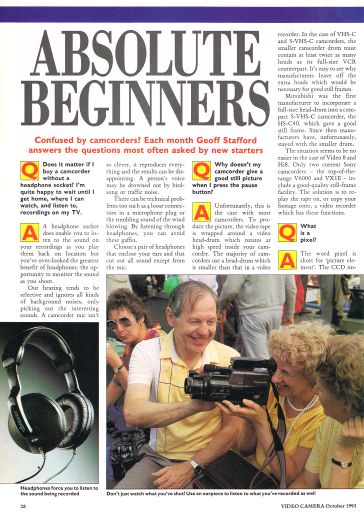 My monthly feature Absolute Beginners had a question and answer format. The man in the picture wrote to the magazine to say that he, his wife and her friend had been pleased to see themselves in the magazine in such a "superb" photo. I had photographed them at the Tall Ships Race in Newcastle. 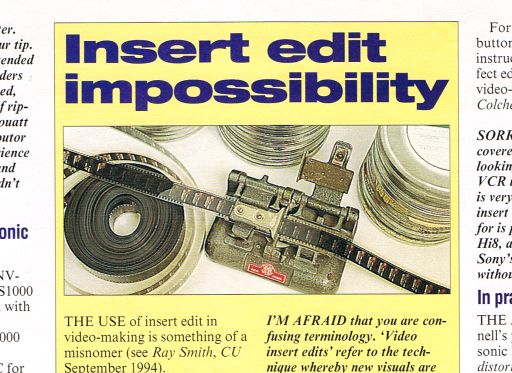 A photo of a 35mm film splicer. 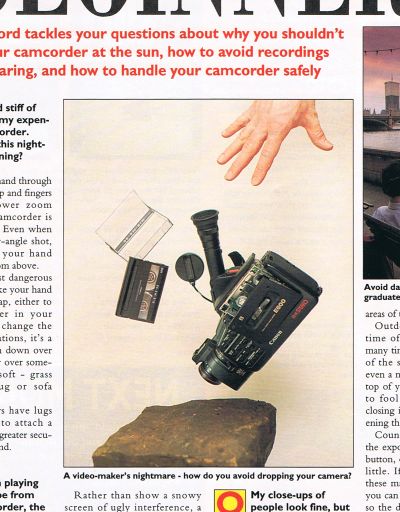 A falling camera in the days before Photoshop! 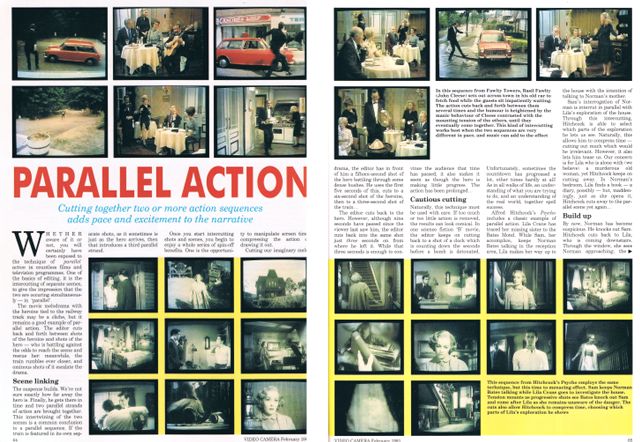 My article about parallel action as an editing technique. Accompanied by image sequences from Fawlty Towers and Psycho! By this time I had perfected a method for photographing from a screen. There were no instant screengrabs back in 1991. It meant a tripod, 35mm film camera, VHS player and television. 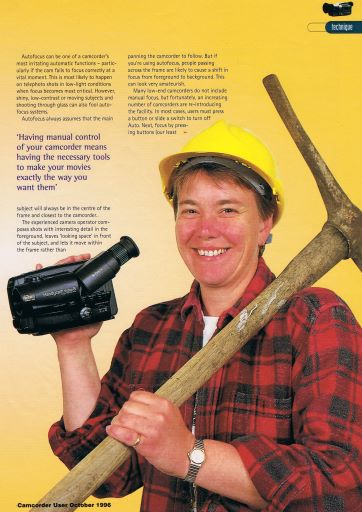 Article and photos: about manual camcorder settings with a picture of a "manual worker". 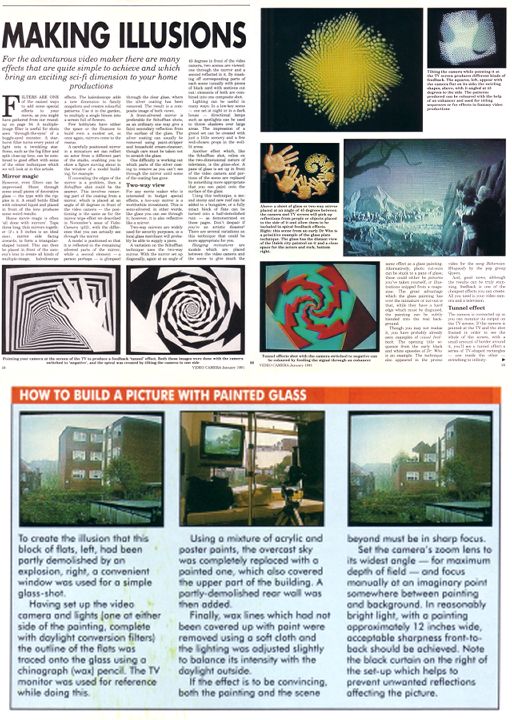 Special effects. The technique of visual feedback had been used in television for many years: in the 1960s title sequence for Doctor Who, in the pop video for Bohemian Rhapsody by Queen and on Top of the Pops. But I don't think anyone had done an illustrated how-to-do-it in a consumer video magazine. Glass painting effects were covered too with another unique photo sequence and a grab of a matte effect courtesy of The Doctor. 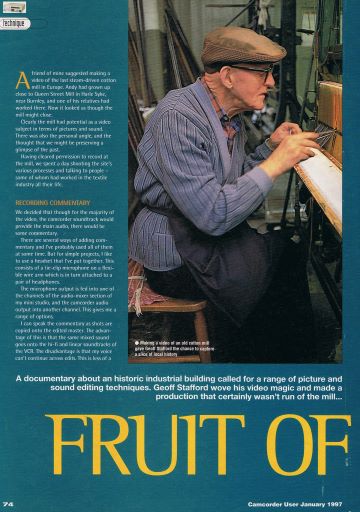 Article and photos. Features that detailed how a particular video was put together were popular. In this case a short film about Queen Street Mill, Harle Syke, which was threatened with closure. 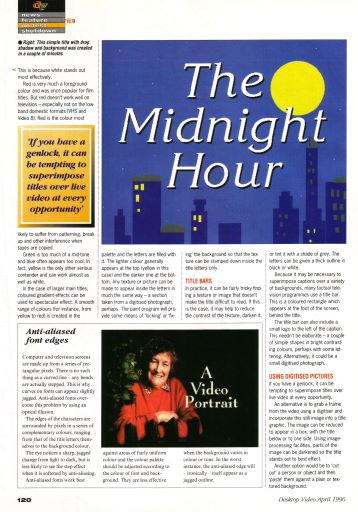 By 1994 I was writing about the Amiga computer, which was cutting edge technology at the time. Here how to generate titles. From 1996 I wrote about the Windows PC too. I reviewed genlocks, chromakey units and graphics software. 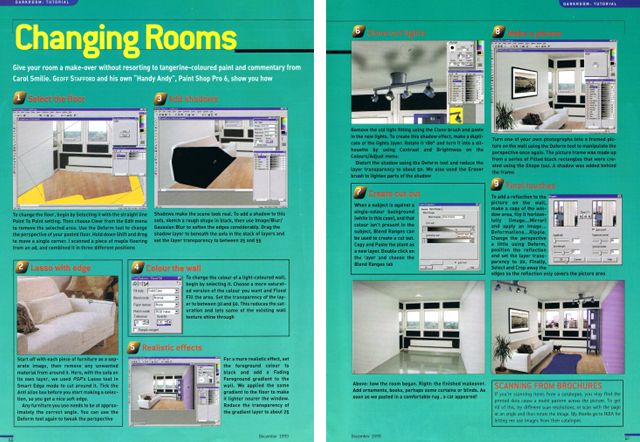 I wrote quite a number of step-by-step how-to-do-it articles about the software Paint Shop Pro for the magazines Digital Photography Monthly and Digital Photo User. Here, how to give your living room a make-over without the BBC and Carol Smilie! More below... 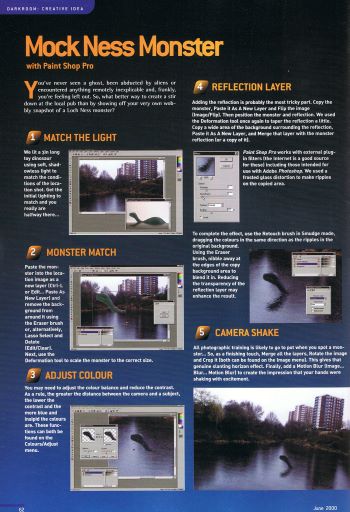 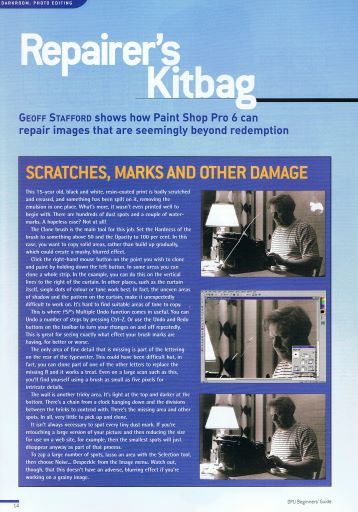 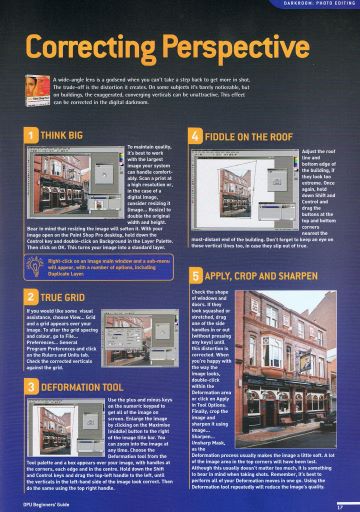 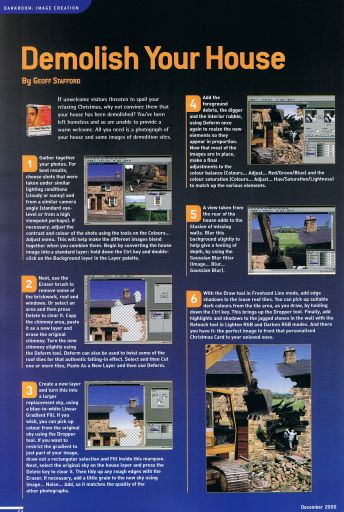 In a bizarre coincidence, five years after this article "demolish your house" a lorry with a digger arm on it crashed into the house at a similar angle. 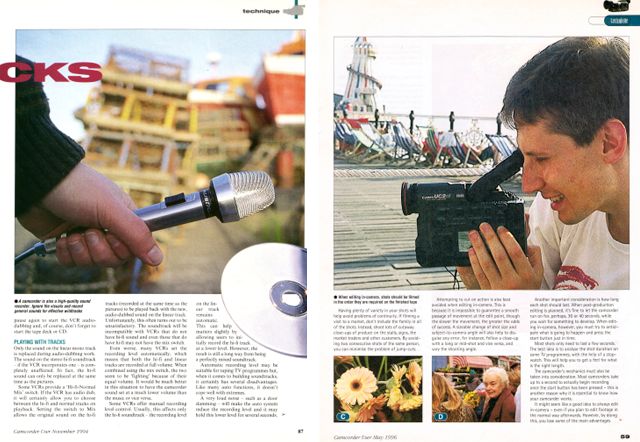 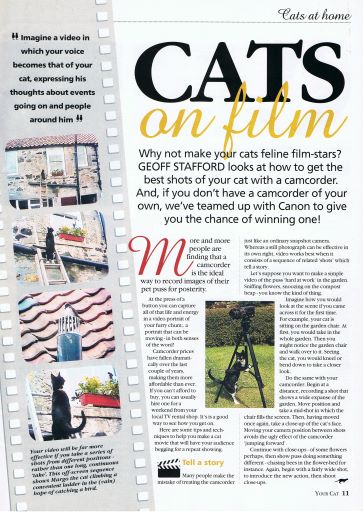 Cats on film. An article with photos for Your Cat magazine. A follow up covered photography techniques.

This was a period of great change. The market for home video and camcorders boomed but there continued to be interest in cine film. Digital titles and animation became a reality using affordable computers. They could control equipment for video editing on tape too.

Magazines that had been printed in mono, other than the covers, switched to full colour overnight. Computers replaced typewriters and began to be used for layout instead of paper and paste. However I continued to print out and fax or post my work for some time. It took a while for some publishers to get to grips with floppy discs!

Black and white prints and original transparencies had to be posted. There was no way to scan, let alone email them. Sending written work by email became a possibility in the first half of the 1990s. To begin with I did it through a third-party bulletin board (BBS) in London called Crystal Tower which I had to call up long distance. The BBS only connected to the internet twice a day to send and receive email for its users. What a long way we've come since then.